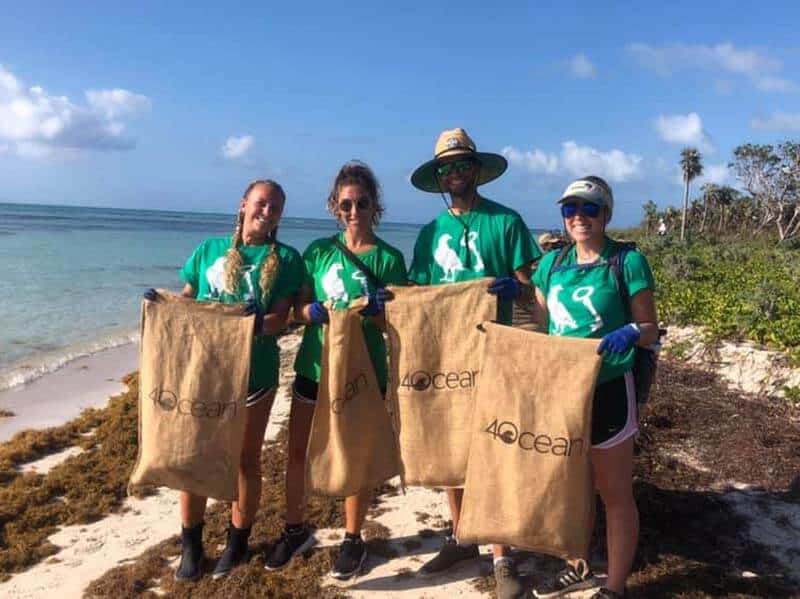 It has been almost two years since Hurricane Irma devastated the Florida Keys and beyond, and many business, communities, and families are still trying to fully recover and get back on their feet. Bahia Honda State Park, arguably one of the most favored spots of the Keys, is no exception. The destruction of Irma caused a long stretch of state park coastline known as Sandspur Beach to be closed off since the hurricane, and there is still much restoration work necessary before it can be entirely open to the public again. However, with the help of the global trash removal initiative 4ocean and a huge turnout from locals and tourists alike, a very successful state park cleanup took place on March 16th. And of course, Pigeon Key was thrilled to be a part of this exciting event!

4ocean is the brainchild of two surfers who were tired of seeing an abundance of trash amidst the waves, and realized they simply had to do something about this prominent issue. They began taking boats out to collect marine debris, and then took this a step further by recycling the materials they found to create bracelets which now fund their clean-up efforts all over the world! The clear beads are made from recycled glass bottles, and the cord is made of recycled plastic bottles. The sale of each individual bracelet allows for the removal of one pound of trash from the ocean and coastlines. In less than 2 years since the start of this movement, 4ocean has removed 4,105,102 pounds of trash from the marine environment! Along with their own trash-collecting initiatives, part of the 4ocean mission includes hosting coastal cleanups in various locations on a regular basis. Their overarching goal is to educate, spread awareness, and bring communities together for a greater good, helping to inspire people to take the steps they can to work towards a more sustainable lifestyle.

448 eager participants made their way to the cleanup site bright and early on a beautiful Saturday morning. There was a lovely mix of families with young children, elderly in their wheelchairs, and every age in between! 4ocean provided each individual with a hemp collection bag and gloves. Our staff from Pigeon Key was happy to report their personal findings, included but not limited to: a fully intact razor, a nerf gun bullet, and pounds and pounds of derelict fishing rope! Much of this heavy rope had to be pulled out from the shallow water, or untangled from around mangrove roots, and then dragged back to the collection site. After just a few hours, when it was time to compile and sort all of the trash, it was amazing to see how much had been
removed. This event was truly a testimony to the positive impacts that a dedicated group of individuals can make when all are devoted to a cause that extends far beyond themselves