A Short History of the Old Seven Mile Bridge 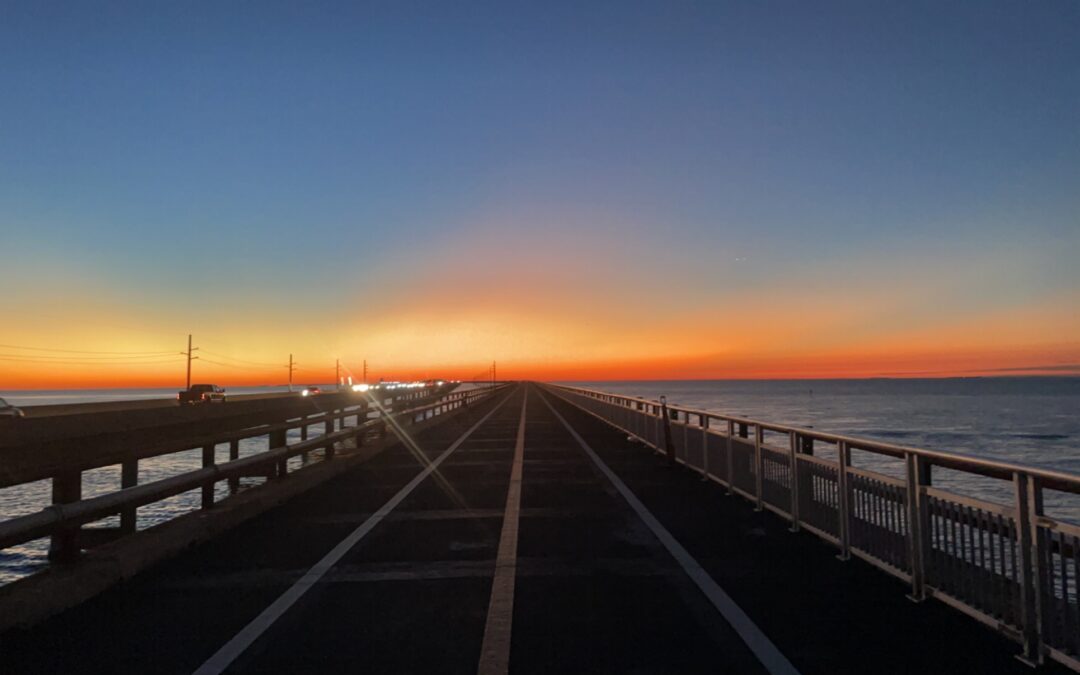 With the reopening of the Old Seven Mile Bridge, we thought we would share some of the extensive history of the bridge and how it has evolved over time.

The construction of the Key West Extension of the Florida East Coast Railway began in 1905 and was financed by Henry Flagler, a wealthy Standard Oil partner. The expansion would run roughly 160 miles from Miami to Key West, with 128 of those miles being over open ocean. The workers were housed at multiple camps up and down the Keys, with Pigeon Key being a main hub for the men building the Railway. At the height of construction, 1908-1912, 400 workers lived on Pigeon Key, making $1.50 a day. The conditions were harsh, and the hours were extremely long (10 hour days/ 6 days a week). Henry Flagler was also raised by a Presbyterian minister and thus had a very strict no alcohol policy for his workers. In order to better enforce this rule, one of the last deck plates placed was the one connecting Pigeon Key to Knight’s Key, now a part of modern-day Marathon. This is part of the section that has been refurbished and reopened in 2022.

Flagler was 75 years old and in decreasing health when the project began and there was a push to finish the Railway before he died. The men were split into two groups, each working 12 hours on and 12 hours off. This meant that the railway was being worked on 24 hours a day. This marathon work effort is actually how the town of Marathon got its name. The project was completed on January 22, 1912, and Flagler, blinded from cataracts, rode the inaugural train down to Key West.

The Railway was used for 23 years from 1912 until the Labor Day Hurricane of 1935, a category 5 storm which cause severe damage to much of the Railway. The Railway was already struggling with the stock market crash in 1929 and thus it was decided that instead of repairing the railway system, it would be sold to the state of Florida. The state had originally planned to build a highway that ran parallel to the Key West Extension as part of the New Deal. However, the skeleton of the Railway provided a much simpler solution. The tracks were ripped up and a 22-foot sheet of steel was laid down and paved. The old railway tracks were repurposed and made up the railings on either side of the highway. The project was completed in three years and in 1938, the Overseas Highway opened. The highway adopted the nickname “Highway of Mirrors” because the narrow road forced passing cars to get so close to one another, the side mirrors were knocked off and littered the pavement with pieces of mirror.

The Overseas Highway became a huge source of income for the Florida Keys, operating as a toll road. The tolls amounted to about $1.25 per car, the equivalent of $15-20 today! While locals were exempt for this toll, it is estimated that the road was still bringing in about $1 million every year. However, in 1954, the State of Florida shut down the toll gate. In 1978 to 1983, the original Overseas Highway was replaced with the current Overseas Highway which runs parallel. The Old Highway still has 23 bridges, some of which have been converted to fishing bridges.

The Old Seven Mile Bridge stretch between Pigeon Key and Marathon was converted to a 2.2 mile walking and biking path. Locals and visitors alike loved to venture out on the bridge, seeing the amazingly diverse marine wildlife from a different vantage point. It was not at all uncommon to see sharks, tarpon, eagle rays, and all manner of fish on the short walk. There was also a trolley that ran from Marathon over to Pigeon Key so folks could visit the island and learn about the history and marine life of the Florida Keys.

Starting in 2006, the trolley was replaced by a ferry and in 2016, the Old Seven Mile Bridge was shut down to walkers and bikers. It was determined that the bridge needed to go through repairs in order for the public to continue to use it. In 2016, the construction began on the parking lot and park at the base of the Seven Mile Bridge on the Marathon side. And in 2017, the repairs to the bridge itself began. The harsh salty conditions and years of use proved to have created a sizable project for the workers, reminiscent of their predecessors over 100 years ago. Along with the Bridge, in 2019, the ramp connecting Pigeon Key to the Old Seven Mile Bridge was reconstructed.

And finally, on January 15th, 2022, the Old Seven Mile Bridge was opened again to pedestrians and bikers. As both the Pigeon Key Foundation and locals, we are extremely excited to see what the future holds now that Pigeon Key and Marathon are connected once more.