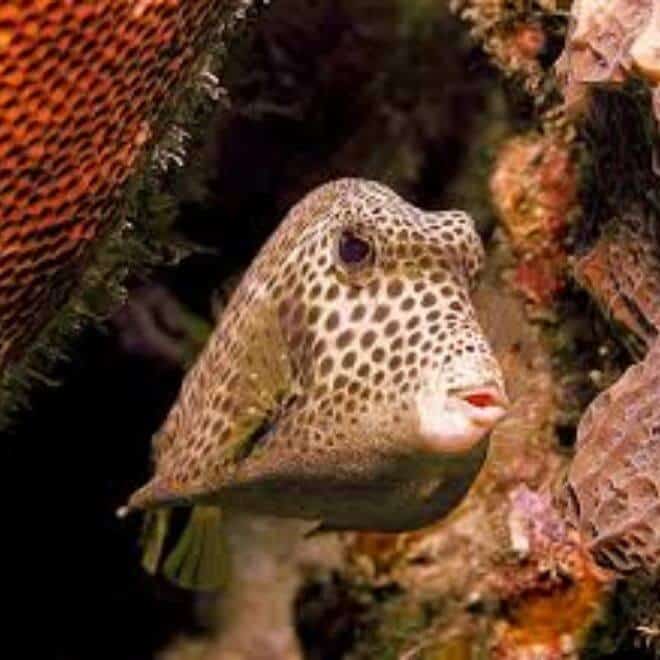 The Buffalo Trunkfish, Lactophrys trigonus, is a peculiar and angular-looking fish found throughout the tropical waters of the western Atlantic and the southern coasts of the United States. They have a unique body, often referred to as its carapace, made of hard hexagonal bony plates. These plates evolved to protect the Trunkfish from predators. Typically reaching 12 inches when fully grown, these fish can be found inhabiting coral reefs and seagrass beds in the Florida Keys. If you’re lucky enough, you may be able to spot the Trunkfish that has been hanging out by the Pigeon Key dock for the past few weeks on your next Pigeon Key visit!

The brown markings and white spots on this fish sometimes causes it to be confused with the White Spotted Pufferfish, but the very unique swimming style of the Buffalo Trunkfish is an easy way to differentiate these two tropical species. All members of the Boxfish family Ostraciidae, including both trunkfish and cowfish, swim by moving with mainly their pectoral and dorsal fins, rather than their caudal fin, allowing them to move efficiently through the water while maintaining agility.

While they may look graceful and enticing, these fish pack a mean punch. If frightened or stressed, Buffalo Trunkfish have the ability to secrete a toxin that is fatal to other fish. This toxin can cause food poisoning in humans if the fish is not prepared correctly, but it is considered a delicacy in many of the Caribbean islands. Meanwhile, the Trunkfish themselves enjoy a diet mostly consisting of small sessile (non-moving) invertebrates, especially sponges and tunicates.

Thankfully, these fish are not listed on the Endangered Species Act due to their stable populations globally. Although, like all marine species, they are at risk of habitat loss from over-development, pollution, and climate change. If you want to spot one of these unique fish, pack a picnic and head to Pigeon Key to snorkel in the seagrass beds around the island or enjoy the dock to find the resident Buffalo Trunkfish. While you’re here, you can also check out the history tour and enjoy the many other amenities of the island!