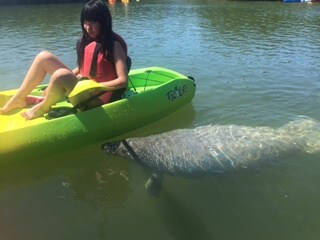 The West Indian Manatee (Trichechus manatus) is a fascinating and delightful animal that has been known to stop by Pigeon Key from time to time. The common name “West Indian” doesn’t refer to the country of India, but actually the colonial name for the Caribbean, the West Indies. The West Indian Manatee is a mammal, which means it is warm blooded, bears live young, and has fur (Yes! Manatees have fur!).  Although it is nothing like the full coat of a dog or cat, these fascinating animals do have the remnants of body hair showing that their ancestors were once much hairier. Interestingly enough, it is this body hair and the slow moving nature of these animals that allows their bodies to be host to algae and even barnacles.

The West Indian Manatee species is divided into 3 subspecies by range, which is the area that the animals are found. The manatee known to frequent the Keys is the Florida Manatee. All Manatee species are slow moving herbivores, which means their diet consists of almost exclusively plants, with one of their favorites being manatee grass, the narrow, round, seagrass found on seagrass beds. However they have been known to eat small fish and crustaceans as a protein source from time to time.  Florida Manatees are large animals with babies born at around 3 feet in length and adults reaching lengths of over 12 feet long and weights ranging from 800-1200 pounds! Mothers and calves communicate using a system of squeaks and groans to identify and stay near each other, while males and females of the species communicate using special chemicals called pheromones which are released into the water. (Manatees have also been known to eat each others poop, which is thought to tell the animals about their counterparts biology, age, gender, and health)

Manatees are unlike many other marine mammals in that they are able to tolerate large changes in salinity and are typically found in shallow coastal seas and estuaries, but actually prefer freshwater. Manatees are naturally peaceful and pose little threat to humans. Although, we do pose a considerable threat to them. Because they have no natural predators, manatees have not evolved a significant flight response from potential threats and in many cases a manatees curious nature will cause it to come investigate kayakers and snorkelers but also place them in harms way of fast approaching boats or poachers. As a result, the population dwindled and was placed on the endangered species list. The conservation effort to protect these wonderful animals has been a resounding success however, and despite their slow growth and breeding (pregnancy takes 12-14 months and yields only 1 or 2 calves) the population has increased over 500 percent in the last 25 years. This has lead them to be removed from the endangered species list this January, and now receiving the less severe designation of threatened.