Native Americans and the Florida Keys 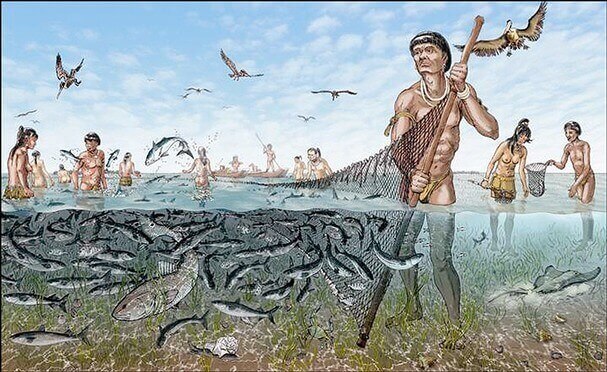 November is National Native American Heritage Month and long before the Keys were explored and colonized by the Spanish, the islands were first home to multiple tribes of Native Americans. It is suspected that the Tequestas and Calusas tribes lived in the Florida Keys, with the Calusas being the dominant tribe, as early as 800 ACE.

The keys were an ideal location for people who lived off the land due to the abundance of food and materials to make tools. The Native Americans lived off primarily seafood including lobster, fish, and turtles, supplementing their diets with meat from deer and racoons. They also were gathers and collected fruits such as sea grapes and cocoplums. Nothing was wasted. The Native Americans used the shells of conchs for shovels, weapons, cups, and hammers. They used the teeth from sharks to create weapons, lining wooden clubs with the sharp teeth. The Native Americans were able to utilize the land and ocean without having a drastic negative impact on the ecosystem.

Soon however, colonizers moved into the Keys, primarily to collect turtles and mahogany, and this caused tension between them and the Native American people. In 1835, the Second Seminole War broke out and much of the Keys were abandoned. Three islands remained occupied, one being Indian key, which continued to house non-indigenous people. The island started as a base for wreckers from Key West but had no permanent residents. In 1824, a store was built on the island and soon a settlement formed around it. The community grew to include 50 to 70 inhabitants and had its own customs agent and post office. The island has its own small militia and 6 cannons to defend the settlement from Native Americans and thieves.

In 1840, there was a raid on Indian Key in the early morning of August 7th. The man on watch that night saw a group of Native Americans surrounding the island and was able to raise the alarm. The majority of the people were able to escape but when the dust settled, there were 13 settlers dead, the island had been thoroughly looted, and all the buildings were burnt to the ground.

Over time, newly introduced disease and depletion of available land and resources pushed the natives from their place in the Keys. However, it is important to note the undeniable lasting impact the Native Americans had on the development of the Florida Keys and the ingenuity it took to live here.