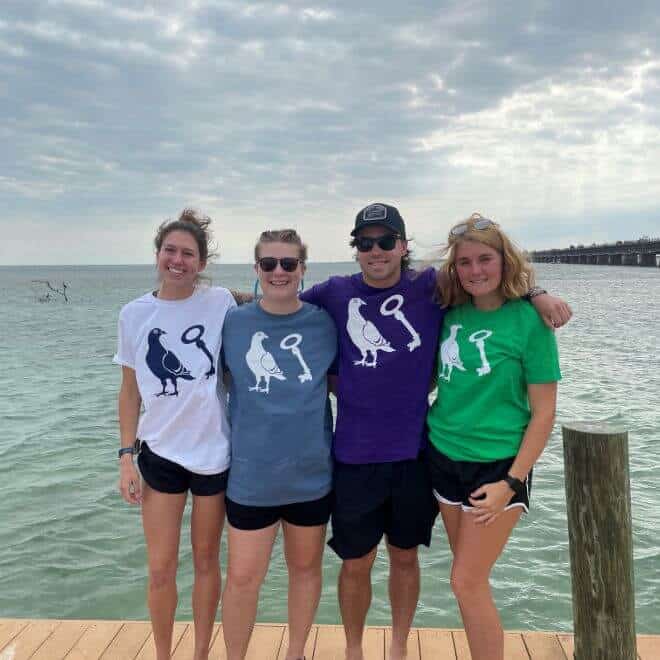 Kara Siglin was born and raised in Washington, D.C. before moving out to Highland, Maryland. She studied International Relations, History, and Spanish at the University of Maryland, College Park. She lived in Madrid for a semester and was also a Teaching Assistant for a summer study abroad program in London and Paris. During her time as an undergraduate, Kara interned for the Smithsonian, two environmental nonprofits, and the Spanish Embassy. She also worked as a Trip Leader at the University’s Adventure Program, where she taught kayaking, canoeing, rock climbing, and backpacking to students and staff. She now guides extended backpacking trips with a company based out of Massachusetts and is excited to keep teaching, exploring, and learning about the natural world at Pigeon Key!

Carson Howard graduated from NC State in May 2020 with a B.S. degree in Zoology with a minor in Wildlife Science. She has always loved exploring nature and has had a passion for working with animals. Carson spent last summer interning on Dewees Island in South Carolina where she worked on the island as a naturalist and also with the US Fish and Wildlife Service locating, moving, and inventorying loggerhead sea turtle nests on remote islands. Carson also has six summers of experience working as a camp counselor in North Carolina where she found her passion for sharing her love of the outdoors with others, especially children. During college, Carson had the opportunity to study abroad in Adelaide, Australia for the Spring of 2019. While there she got to check off some bucket list items such as seeing the Sydney Opera House, scuba diving on the Great Barrier Reef, and even solo travel in New Zealand for a week. Carson’s interests include kayaking, paddleboarding, surfing, swimming, and scuba diving when given the chance. Carson is thrilled for this opportunity and plans to make the most of the warm weather and great experiences while on Pigeon Key.

Tyler Rapposelli was born and raised in Reading, Pennsylvania and went to college at West Chester University of Pennsylvania, where he earned a Bachelor’s Degree in Biology with a concentration in Marine Science. Tyler played on the West Chester University Men’s Soccer team during his 4 years in college, in which they won a regional championship and were the national runners-up during his Senior year. He first fell in love with the ocean and the organisms that inhabit it as a child going out on his grandparents’ boat. Living by the water has always been a dream of his. He would spend the majority of his summers throughout college living and working by the Rehoboth Bay in Delaware. Tyler hopes to inspire children of younger generations to fall in love with marine biology and the wonderful ecosystem under the sea during his time here on Pigeon Key.

Leanna Runyan was born and raised in Avon, Indiana, and graduated from Ball State University with a degree in Biology and Zoology. In college she focused her studies on wildlife biology participating in clubs and organization working with rescue animals. She helped socialize dogs and cats so they could get adopted and used social media to help animals find their forever families. She realized her love for marine biology when she started her scuba career. Within one year, she completed more than 60 dives and many courses to become a master diver. She has a love for outdoor adventures including dirt biking, rock climbing, camping, canyoneering, and scuba diving. Leanna’s passion for marine life and education is what lead her to the internship with the Pigeon Key Foundation. She hopes to share her knowledge and passion of marine and ocean conservation with the student groups visiting Pigeon Key.