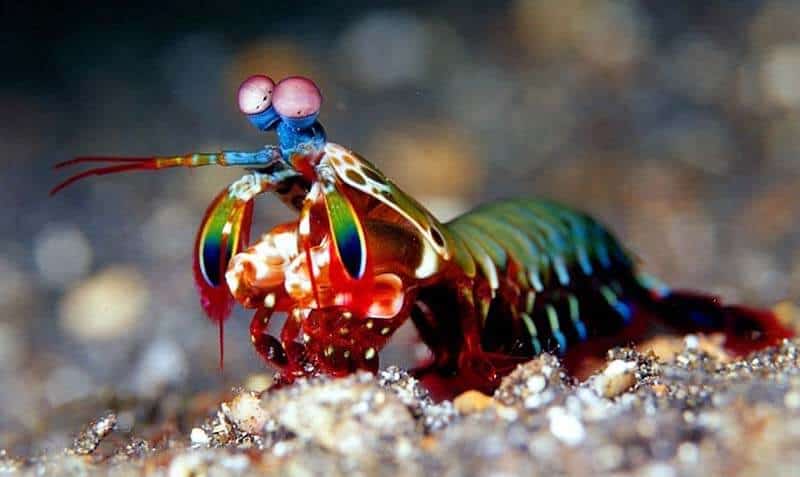 The ocean is rife with intimidating and effective predators, both big and, unexpectedly, tiny. The most infamous are large animals such as great white sharks, killer whales, and colossal squids. However, some less obvious predators possess incredible adaptations which allow them to dominate in their respective ocean niches. The peacock mantis shrimp, reaching a maximum body size of only seven inches, is one of the strongest animals in the sea. The creature’s powerful claws make it a force to be reckoned with, acting dually as vital hunting tools and protection against predators.

The peacock mantis shrimp’s body is equipped with several pairs of specialized limbs which assist in locomotion and the source of their staggering strength. Pairs of swimmerets occupy the latter half of the shrimp and help the organism to propel itself forward in the water, while the upper body of the critter hosts several paired legs which enable it to walk across the sea floor. Undoubtedly, the most unique pair of limbs on a peacock mantis shrimp is its claws. These tiny appendages pack quite a punch – literally! The peacock mantis shrimp has the hardest punch in the animal kingdom, relative to its small size. In fact, if humans were as strong as these miraculous creatures, a person could throw a baseball into the orbit of the Earth! The peacock mantis shrimp uses its strong claws to break through the hard shells of its prey and keep predators at bay. This amazing adaptation makes the shrimp difficult to keep on display in aquariums, because they are known for punching through the glass of their tanks and making their escape!

Some of our staff have personally felt the mighty punch of these shrimp in the waters around Pigeon Key. Fortunately for us humans, the species of mantis shrimp around our islands are very small and are not capable of inflicting much damage upon our much larger bodies. The feeling of being punched by one of these critters has been compared to being flicked by a rubber band. So next time you are snorkeling or tidepooling around the island, keep your eye out for these fascinating creatures. You might even get to say you have experienced their famous punch for yourself!