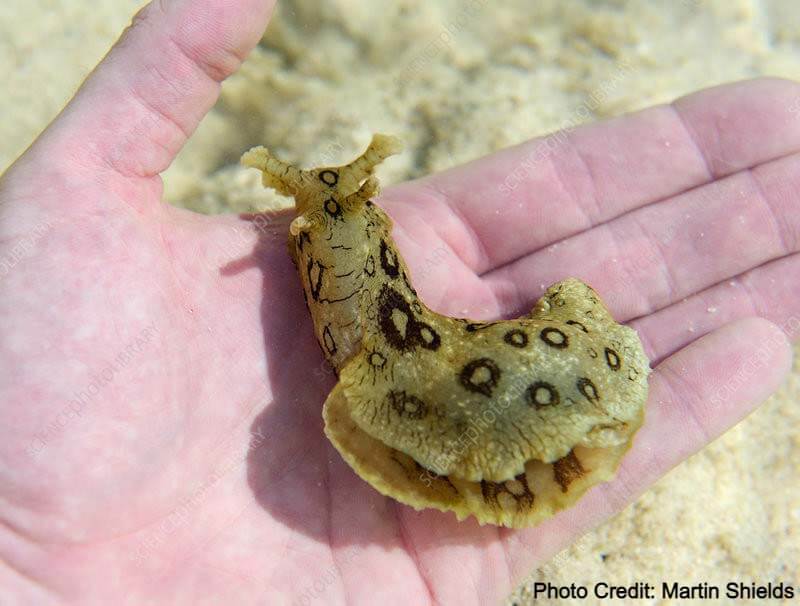 Do not be fooled by the name sea hare, this creature does not have fur or the ability to jump and probably is not the best pet. Instead, it is a rather large sized marine slug, named for its ear-like projections called “rhinophores,” that look like rabbit ears but actually function as their sense of smell.

The Sea Hare species we see here on Pigeon Key is the It has black rings of different sizes assorted all over its body. Tidepooling or snorkeling in seagrass beds and shallow hardbottom habitats is the best way to find one of these creatures.

The sea hare belongs to Phylum Mollusca and the Class Gastropoda, making it closely related to snails, slugs, and nudibranchs (another marine slug). They are soft bodied, sometimes reaching a foot long in the Keys. While these creatures do have a small internal shell, when removed from the water, sea hares have the consistency of slime. Having such a soft body, these animals can bruise very easily, so if you find one, please be gentle. Their bodies are covered in an acidic mucus layer that acts as their first line of defense against predators. If the predator is relentless, the sea hare also has the ability to shoot out ink. The color and make up of the sea hare ink is determined by the type of algae the mollusk eats. Some inks taste terrible and can essentially desensitize the predator’s sense of smell. Other inks can attract the predator to the ink cloud, who will try to eat the ink cloud instead of the sea hare. Sea hare ink was also used by ancient humans to dye clothing and textiles.

If their defense mechanisms were not impressive enough for you, let’s talk about how sea hares make more sea hares. They are nocturnal, and when ready to mate, will release a love pheromone called “attractin.” This pheromone is up to 1000 times stronger than human pheromones and will attract sea hares from long distances away. Sea hares are hermaphrodites, meaning they act as both the male and the female in the relationship. Whichever individual is attracted to the pheromones released by the first sea hare will become the male. The sea hares then make a “conga line” with the female in the front. If a third sea hare shows up, the one in the middle, previously the male, will act as both the male and the female. They can form lines up to 20 sea hares long and can remain in formation for days. Females will lay their eggs near shore in egg masses look like noodles and are commonly found washed up on the coast. Unfortunately, after the sea hare lays their eggs, their life will come to an end.

Pigeon Key staff find these critters in the shallow waters during the spring and summer months. They are always an interesting species to find. They are majestic to watch swim through the water and have amazing camouflage abilities.