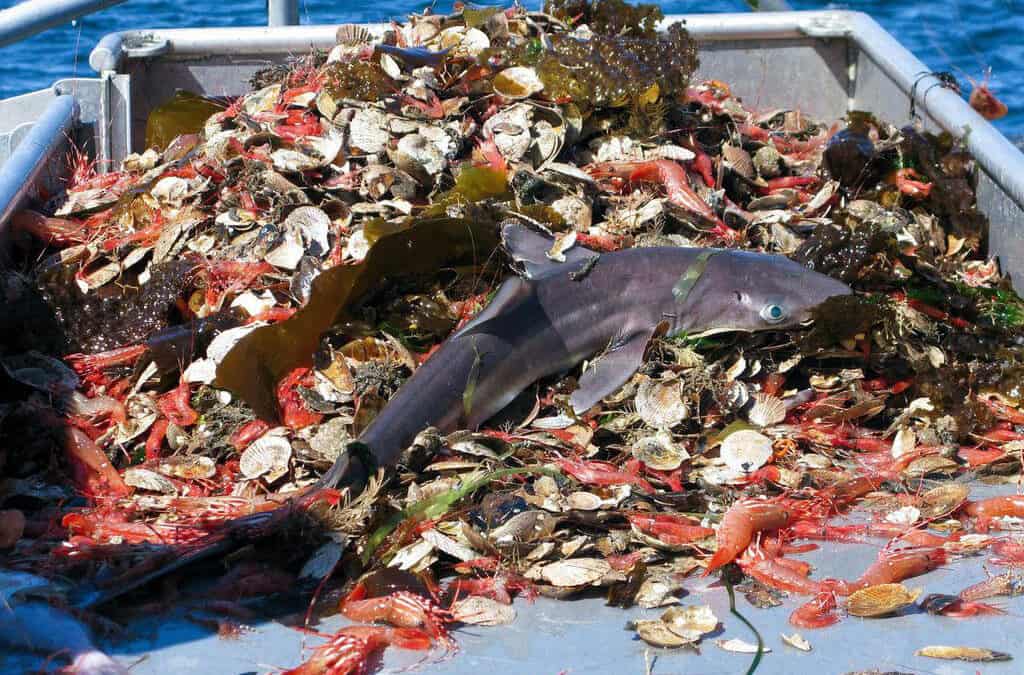 Every year, millions of visitors come down to the Florida Keys to fish in the crystal-clear waters.

Anglers seek out recreational and commercial target species such as tarpon, bonefish, and snook. But the ocean is not as full as it once was.

All over the globe, people are catching fish faster than they can respawn, meaning the species populations are plummeting. This is a problem called overfishing. Today, one-third of global fisheries are overfished and many more have fully collapsed.

Overfishing can take many forms.

Large commercial vessels sometimes practice unsustainable fishing like trolling the bottom of the ocean with large nets that rip up coral and catch more fish than they need. This can also result in bycatch, which is when a non-target species fish or other marine creature gets unintentionally caught. Bycatch is a leading cause of human-related death for many beloved marine animals like sharks, dolphins, and turtles.

Another unsustainable fishing practice is harvesting fish before or during the spawning season.

This results in no reproductively mature adults, meaning there will not be another generation of fish. Large commercial target fish species like Bigeye or Yellowfin Tuna are affected by these practices because they reproduce slowly.

The World Wildlife Fund estimates that the ocean global fishing fleet is 2.5 times bigger than what the oceans can sustainably support. As a result, fishermen have resorted to “fishing down the food web”. This is a process in which the larger target species’ populations, think the swordfish, have been depleted due to overfishing in a particular area or fishery and so the commercial vessels instead focus their efforts on catching smaller species such as crab and squid. This practice further disturbs the food web because species that prey on those small species now have nothing to eat. This affects the ecological dynamics of marine communities that were once kept in check by larger species.

Overfishing does not just affect the fish and other marine organisms.

Three billion people rely on seafood as a food source and 200 million people work in the fishing industry. In the Keys, commercial fishing contributes around $900 million to the economy alone. With the collapse of certain fisheries, folks are out of work. And with the depleting fish populations, coastal small fishermen cannot feed their families.

So how can we keep the fishing industry sustainable in the Keys?

Many local and visiting anglers support a sustainable and responsible fishery as it will ensure desired species remain abundant for generations to come. We can all do our part through smart fishing practices. The Florida Fish and Wildlife Commission has fishing regulations put in place for each species. This includes bag limits, which restrict the number of fish an angler can catch in a day, size limits, and seasons when you can fish for the species. For example, in Monroe County, snook can only be harvested during their seasons which are December 1 to the end of February and May 1 to Aug 31. And during this season, anglers may only keep one snook per day and the fish must be between 28 and 33 inches.

Commercial fishermen also have many regulations they must abide by in hopes of reducing the bycatch and overfishing of their particular fishery. Bait and equipment used must be prepared a particular way and is closely regulated regionally. Each fishing vessel has individual quotas that determine how much of a share of the annual fish caught they can have. They also have pound limits per trip. However, commercial fishing still leads to overexploitation, and fisheries scientists are actively searching for new solutions.

If you are not a fisherman, you can still help by making smart choices about what seafood you eat, and what recreational activities you partake in. A great resource is the Seafood Watch App, which allows users to know which dishes are sustainable and which they should stay away from. Maybe go for the locally caught, fast reproducing mahi-mahi as opposed to the very slow reproducing grouper.

Overfishing is a daunting problem but one we can solve if we all work together.

Talk to your friends and family about sustainable fishing and help us keep the ocean alive for years to come!