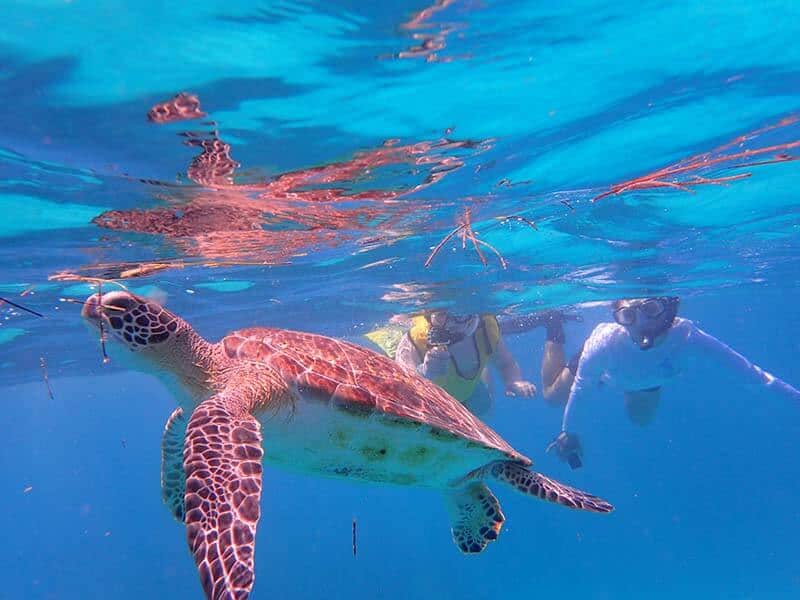 Floridian waters house five out of the seven sea turtle species; though we only commonly encounter three species that will nest on Florida beaches. Nesting season in the Florida Keys runs from April 15th to October 31st and many organizations unite and collect valuable data on these creatures to gain a better understanding of them and in exchange to develop better ways to protect them. In the year 2016, Fish and Wildlife Conservation Committees (FWC) Florida nesting report indicated the loggerhead sea turtle was the dominant species accounted for having 123,000 recorded nests, the green sea turtle followed at about 5,400 nests, then the leatherback sea turtles with a mere 1,000 nests. Most species encountered in Florida are classified as Endangered under the IUCN Red List of Threatened species, making sea turtle conservation that much more important. Historically, over-harvesting by humans for their shells, meats, and eggs was the contributing factor to population decreases. Studies show with conservation efforts, 1 in every 1,000 sea turtles make it to adulthood. Without conservation efforts, only 1 out of 10,000 would survive.

The frequency of spotting a sea turtle here in the Keys is a common occurrence, from foraging around the seagrass beds, hanging around the coral reefs, and cruising the open ocean. Popular nesting beaches around Pigeon Key and in Marathon include Coco Plum and Sombrero Beach. Other Florida Keys hotspots include Bahia Honda State Park, Smather’s and Higgs beaches in Key West and the Dry Tortugas National Park. Pigeon Key staff often witness them cruising around the island and forging in nearby areas, though without sandy beaches we do not get any nesting. More often we find sea turtles at Sombrero Reef which allows our students an up-close and personal experience and an opportunity of hands-on education. We also bring student groups to Bahia Honda State Park for beach clean-ups, which is important for the sea turtles in order to have debris free nesting grounds.

Determining whether a sea turtle has nested is quite tricky, and should be left to those with proper permits and knowledge to verify the nest. However, if you find a “crawl” marking up and down the beach it does indicate the presence of turtles. The process of creating a nest for the females are quite an extensive process; After emerging from the sea the female turtle will use her rear flippers to excavate a nest into which she will deposit her clutch of eggs, 110 eggs on average. After depositing her eggs, the female will use her front flippers to cover the egg chamber with sand, attempting to camouflage the nest, and she will trek back to the water, leaving her eggs to incubate and hatch on their own. When hatchlings emerge after incubating under the sand for about two months, they will head to the sea. Nighttime emergences are essential for a successful hatching since it will camouflage the hatchlings from predators. The temperatures are lower and reduce the chances of dehydration and the reflection of the moon on the waves provides a directional force for the newborns.

How you can help during sea turtle nesting season:

Use red (or amber) colored light on beaches during the night:

Typically, hatchlings are attracted to the brightest light source on the beach, which would be the moons reflection on the water. When encountering hatchlings with a typical flashlight it can cause a change in the hatchlings orientation and cause them to crawl away from the water line, resulting in wasted energies. A hatchling stores enough energy from the yolk sack for about three to five days to swim far enough into the ocean where it can find a food source. Similarly, disorientation can occur by artificial lighting on buildings, bright outdoor lights on beach side developments.

Do not leave beach furniture or debris on the beach:

To reduce the chance of a nesting female turtle becoming entangled in beach furniture, simply take everything you bring to the beach home with you. Any fishing gear and trash is included.

Do not disturb or physically harass nesting females and hatchlings:

Sea turtles get distracted and startled fairly easy, if disturbed enough the female can abandon her nest entirely. If you’re walking on the beach at night and happen to catch a nesting event just stay away and never touch these creatures, if caught you can pay a hefty fine or even get jail time.