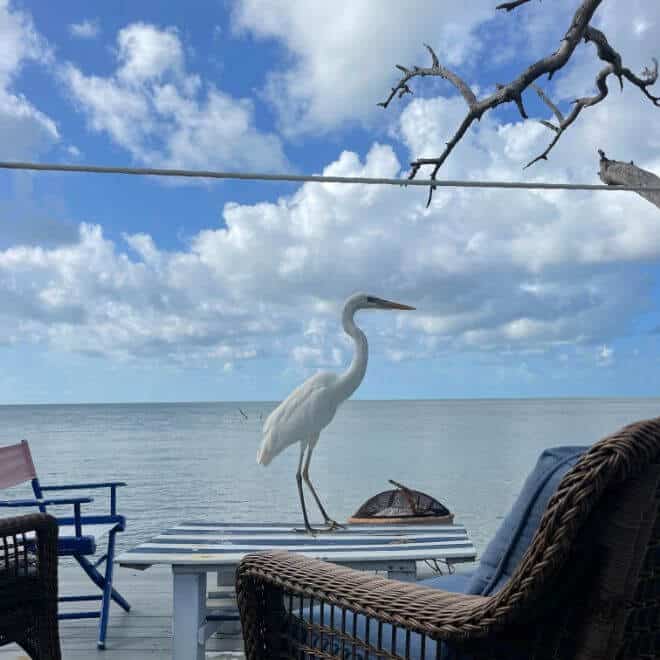 Edgar, as he has affectionately been named, is Pigeon Key’s resident Great White Heron. Along with the two ducks we have on the island, he is considered a rehab bird due to an injured leg and has found sanctuary on our island.

Great White Herons (GWH) are white morphs of the well-known bird, the Great Blue Heron. Slightly different than another large white bird in the area, the Great Egret, GWHs can be identified by their head and chest plumes (long feathers) and paler legs. This particular morph of the Great Blue Heron is only found in South Florida, along the Keys, and in the Caribbean. The GWH is found along saltwater coasts and in mangroves, as opposed to the freshwater swamps and marshes that Great Blue Herons prefer.

These herons are the largest of the heron species found in North America, standing at an average of 3 to 4.5 feet, with the white morph being on the larger side. Most populations of Herons are migratory, however the Great White Heron populations are year-round residents. Great White Herons have an extremely diverse diet. They eat small fish and insects, but are also known to eat small mammals, reptiles, and even other birds.

GWH nests are normally found in trees, but occasionally can be ground nests in marshes or amongst mangrove forests. The male heron collects the majority of the nest building materials while the female heron will build the nests, which can span to a 4-foot diameter. Their broods (groups of eggs) normally contain 2-6 eggs and they will have 1-2 broods per breeding season.

Great Blue Herons, and therefore Great White Herons as well, are federally protected under the Migratory Bird Treaty Act, and their populations are stable. However, they do experience some threats to their numbers. The biggest threats being habitat loss in the form of human development and, being a water bird, reduced water quality.

Come down to Pigeon Key to observe Edgar in his natural habitat, hunting and flying around despite his hurt leg! Remember he is a protected species and is healing, so make sure to give him space and watch from a distance.