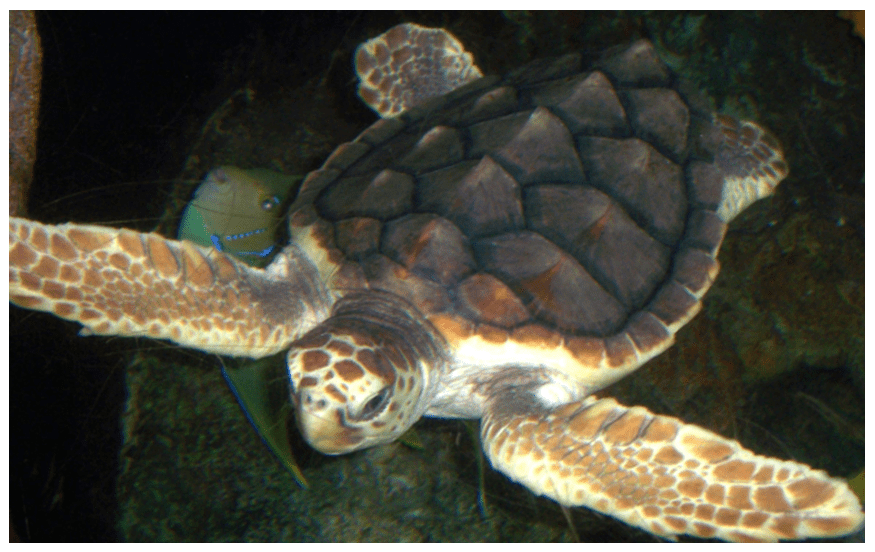 Florida’s most common species of sea turtle is the Loggerhead (Caretta caretta), which is named for its exceptionally large head and powerful jaw muscles. The adult loggerhead has a heart-shaped, reddish-brown top shell (carapace) and a yellow bottom shell (plastron). Full grown Loggerheads in the southeastern United States weigh an average of 250 pounds and are generally about three feet long. Scientists believe that loggerheads are long lived and could live to 50 years or more.

Loggerheads are carnivores that eat crustaceans, fish, and other marine animals. The hatchlings feed on small animals living in the floating mats called sargassum, where they spend their early developmental years. Juveniles and adults eat mostly bottom-dwelling invertebrates such as whelks, mollusks, horseshoe crabs, and sea urchins.

Sea turtle nesting season runs annually from May 1st to October 31st and is a very exciting time. Nesting may occur on any sandy beach in the Florida Keys but occurs in Islamorada mainly between mile markers 72 and 83, primarily on the Atlantic shoreline. Female loggerheads are thought to reach maturity at about 35 years of age. Every two to three years, they mate in coastal waters and then return to nest on the same beach where they themselves hatched. It is thought that they do this by using the earth’s magnetic fields to navigate back to the area where they were born decades earlier. They will lay an average of four clutches containing between 60 to 160 eggs in each, which will then incubate for 60 days before emerging. Loggerhead eggs have a leathery surface and are the size of a golf ball. The sex of the hatchlings is determined by incubation temperature. Warmer temperatures result in the great majority being females and cooler temperatures produce mainly or only males.

The greatest threat to Loggerhead sea turtles is loss of nesting habitat due to coastal development, predation of nests, and human disturbances, such as coastal lighting and housing developments. These can cause disorientations during the emergence of hatchlings. Other major threats include incidental capture in longline fishing, boat strikes, disease, and marine debris. The loggerhead sea turtle was listed as threatened in 1978 under the Endangered Species Act and has received federal protection ever since.

It is vitally important that we safely share our beaches with these fascinating animals. Here are some of the ways you can help protect sea turtles during the nesting season: