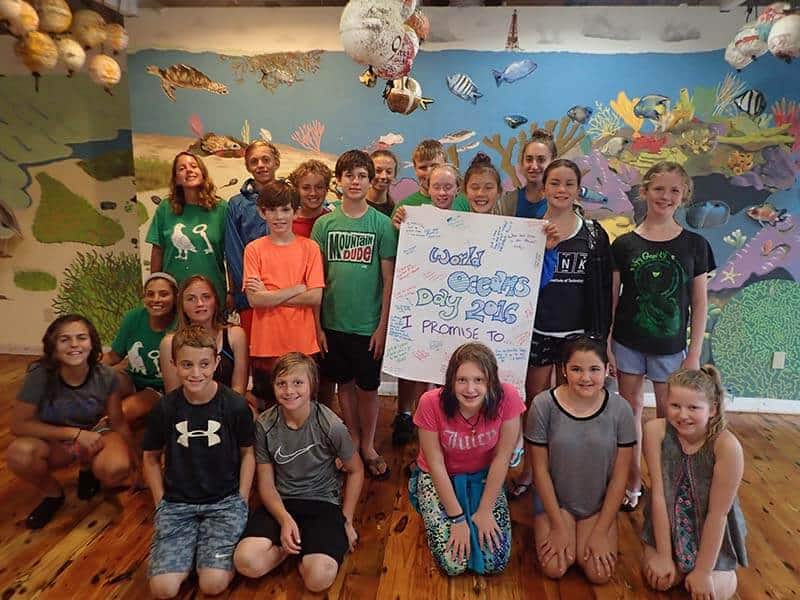 “Even if you never have the chance to see or touch the ocean, the ocean touches you with every breath you take, every drop of water you drink, every bite you consume. Everyone, everywhere is inextricably connected to and utterly dependent upon the existence of the sea.”
— Sylvia A. Earle, The World Is Blue: How Our Fate and the Ocean’s Are One

Last week the Pigeon Key Foundation and Marine Science Center and students from Saint Stephen’s Episcopal School joined an international community of ocean advocates in celebrating World Oceans Day, which is observed annually on June 8th by the United Nations General Assembly. World Oceans Day is intended to raise awareness of the incredible significance of our oceans, inspire united global action for ocean conservation, and encourage appreciation of its intrinsic value. This year’s theme is “healthy oceans, healthy planet”.

Even if you are landlocked and not one of the 3 billion people who depend on marine and coastal biodiversity for a livelihood, the health of our oceans still affects you. Oceans contain 97% of Earth’s water, although it is salt water, it is all connected through the water cycle to our supply of drinking water. Meanwhile, marine organisms provide 70% of the oxygen we breathe through the process of photosynthesis. The oceans are also a critical source of medicinal resources. If you have had a shot recently, the drugs and medical equipment involved likely had to pass a contamination test that relies on horseshoe crab blood to detect dangerous bacteria. Furthermore, ecologists estimate that we are 300-400 times more likely to find valuable chemical compounds with medical potential in the sea, particularly within coral reefs, than on land. Unfortunately with threats like coral bleaching and ocean acidification, many fear that species will be lost before we even have the chance to discover them.

This is where you come in! Coral bleaching, a phenomenon that eventually leads to the death of coral reefs, and the increasing acidification of our oceans are both results of climate change. Keeping in mind “healthy oceans, healthy planet”, you can choose to conserve energy to reduce your use of fossil fuels, the root source of anthropogenic climate change. What’s great is that the steps you take to help one aspect of the environment also help in other areas as well! For example, by choosing reusable bags or water bottles, you eliminate the need to use energy to create new ones and are therefore combating climate change. At the same time, reusable bags and water bottles also reduce demand for disposable plastic products.

In honor of World Oceans Day, the students of St. Stephen’s and Pigeon Key staff made individual promises to help our oceans throughout the year. Some students promised to pick up trash whenever they go to the beach, others promised to spread the word about ocean conservation. Some staff promises included only using reusable bags and no longer using plastic straws. We then shared our promises with the photo above on social media as part of the “Selfie for the Sea” campaign. To spread awareness and take action to protect our oceans, share your own promise and #SelfieForTheSea on social media! Below are a few resources to learn more about World Oceans Day and opportunities for you to get involved. Happy World Oceans Day!